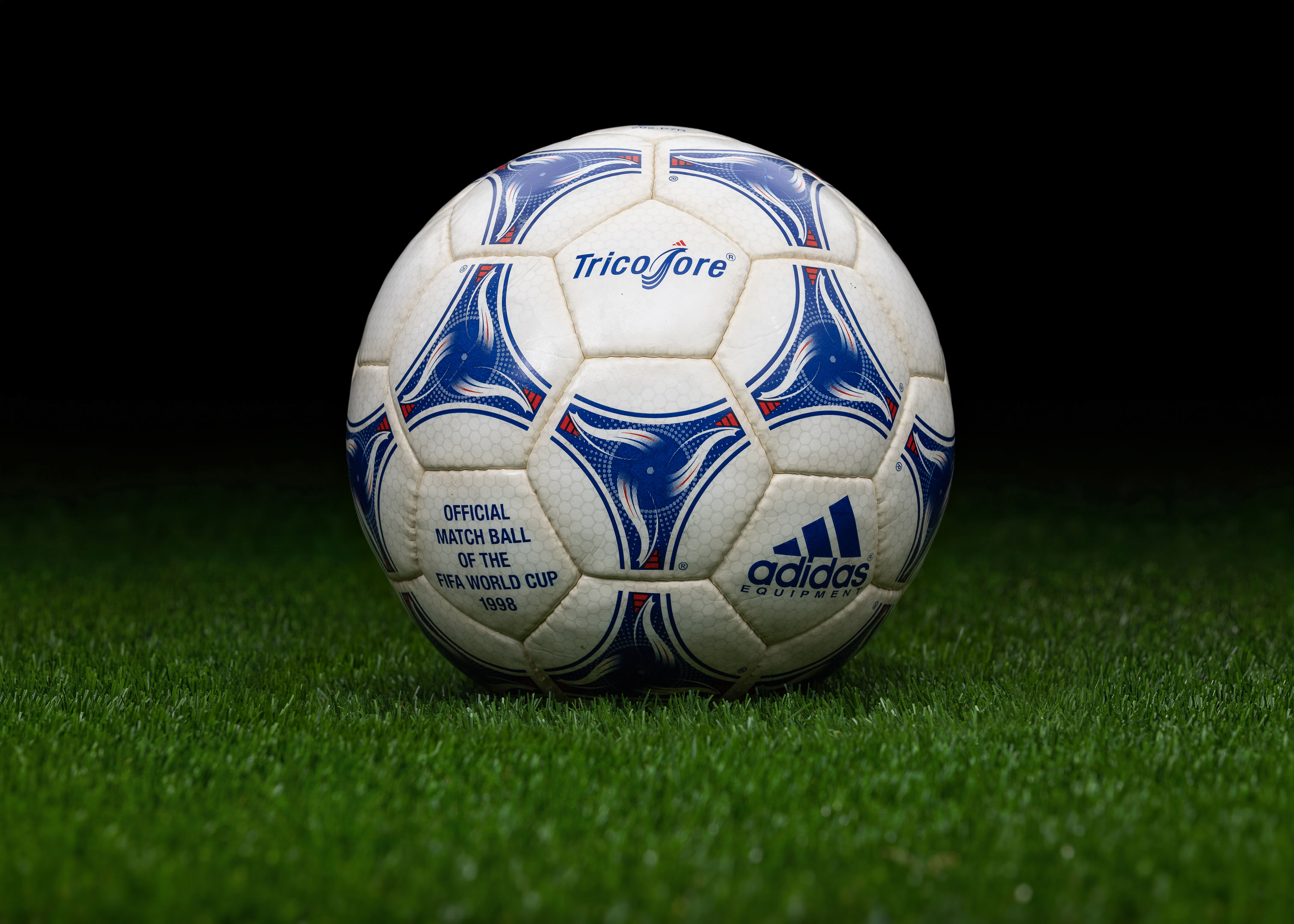 Made in Morocco match ball

Many people believe that the Tricolore was the first colored Adidas ball produced for major tournaments, but this is not true: in 1996, colored balls were already used at the European Championships (adidas Questra Europa) and the Olympics (Adidas Questra Olympia). So the statement is only correct like this: the Tricolore was the first colored Adidas World Cup ball. But this is not the only reason why the Tricolore has become an eternally defining ball. After all, this was the last World Cup ball since 1978 with the Tango design. (The Tango design was used for two more years, on the official ball of the 1999 Women’s World Cup as Adidas Icon, on the ball of the 2000 European Championship as Terrestra Silverstream and at the 2000 Olympic Games as Gamarada). The name and colors of the Tricolore ball refer to the French flag. Michel Platini specifically instructed Adidas to include French industry among the motifs on the ball, which is how the turbine came to be. But the Tango model also features the Gallic rooster, whose red crest evokes the manufacturer’s logo, which is a brilliant design element, and many consider the Tricolore to be the most beautiful Adidas ball to date.

On the surface of the ball, hexagons resembling a honeycomb lattice structure form a complete net, which refers to the newly developed foamed hi-tech layer below the surface. Thanks to the microcells in it, the energy is more evenly distributed in the ball after the force impact (kicking, heading) on ​​the ball, making its movement more predictable. Due to the spongy layers, the ball was softer to the touch and more compressible than its predecessors, yet it had explosive bounce characteristics, making it faster than them.

Also, in order to speed up the game, more balls were already used in the matches of the World Cup in France, for example, the France-Brazil (3-0) final was played with 11 Tricolore balls. But of course, it was not only for this reason that more balls had to be produced. Before the World Cup, adidas launched a fantastic campaign featuring the most famous footballers of the time. These commercials are still considered epoch-making due to their atmosphere, so it is no wonder that the Tricolore has become a ball sold in very large numbers around the world. Of course, the fact that this World Cup was organized with the participation of 32 teams also contributed to this. Adidas was able to make production more efficient by moving the previous production in France to Morocco. Since the 1970 World Cup in Mexico, Adidas has manufactured the balls for World Cups in France, and this long streak was broken at the home tournament. This time, the “Made in Morocco” inscription was not printed under the Adidas logo, but next to the valve. This version is the most valuable among collectors, but there are also “made in Vietnam” and “made in Pakistan” versions.