Picture 1 shows a page of a vintage football equipment catalogue made by the French AA Tunmer & Co. from 1913 where these two new models were already advertised. The 12 panel ball on the left hand side was called „Players”, while the other ball on the right hand side was the famous „T-model” that consisted of only 11 panels. Both balls were more spherical than their predecessors and immediately became successful and widely used for many decades during the Olympic Games and national competitions. No wonder that these two models were later adopted for the first FIFA World Cup in Uruguay as the only balls used in the tournament.

There was another famous variation of the regular 12 panel balls as seen on Picture 2. The name of this ball was „Globe” and it was manufactured by another British company called Cliff’s. The difference between the „Globe” and the above mentioned „Players” is only the roundness of the edges of the 12 identical panels the balls were made of. (This set of design was so successful and long lasting that even the 1950 World Cup ball had similar, 12 panel structure, however this new ball was already laceless.) As you can see on Picture 3 the final match of the 1928 Olympic Games between Uruguay and Argentina was also played with this classic 12 panel ball, the „Globe”. This is another official record to prove the success of the 12 panel balls even before the first FIFA World Cup in 1930.

Balls used in the World Cup

There were only 18 matches played by the 13 participating teams during the first FIFA World Cup in Uruguay. The balls used in the tournament were not allowed to have any prints or manufacturer’s logos on their surface, this formal practice originated from the Olympic Football tournaments before the 1930 World Cup. As for the balls used in the World Cup, we can see the same thing: there were no new balls constructed directly for the first World Cup, they used the 12 panel and the T-model balls as described in the introduction. The T-model ball was the most frequently used ball during the first FIFA World Cup (13 matches out of the total 18 games played). The T-model ball (also called the „Wembley”) was made by the English company John Salter & Son from Aldershot (London) and had been imported by Clericetti & Barrela from Montevideo but as stated earlier none of these balls were branded in the World Cup matches.

During the World Cup the two participating teams of each and every game had to agree which ball to use. Before the final Uruguay always played their matches with the T-model ball whereas Argentina were allowed to use the 12 panel ball which they called „Tiento”. This ball was brought from Buenos Aires but imported from Scotland where it was manufactured. These two teams had already faced each other in the final of the 1928 Olympic Football Tournament so the conflict of which ball to use in the final should both these teams reach the most important game of the World Cup was already in the air…

The success of Uruguay and Argentina brought them all the way to the final again. As expected the two nations could not agree which ball to use in the most important game. The Belgian referee (John Langenus) remained neutral and did not want to influence the game with his own decision. Therefore a compromise was born: they played the first half of the match with the 12 panel ball supported by Argentina and the second half with the T-model ball as the host nation requested. As we know from the outcome of the game the role of the used balls became crucial: Argentina won the first half 2:1 with their 12 panel „Tiento” ball but Uruguay came back in the game and finally won it with the T-model ball and became the first World Champions. The score being 4:2 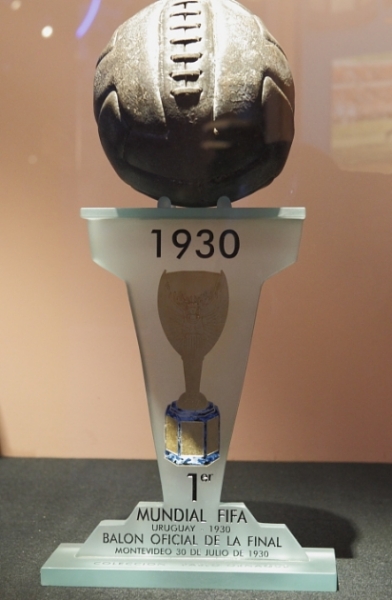