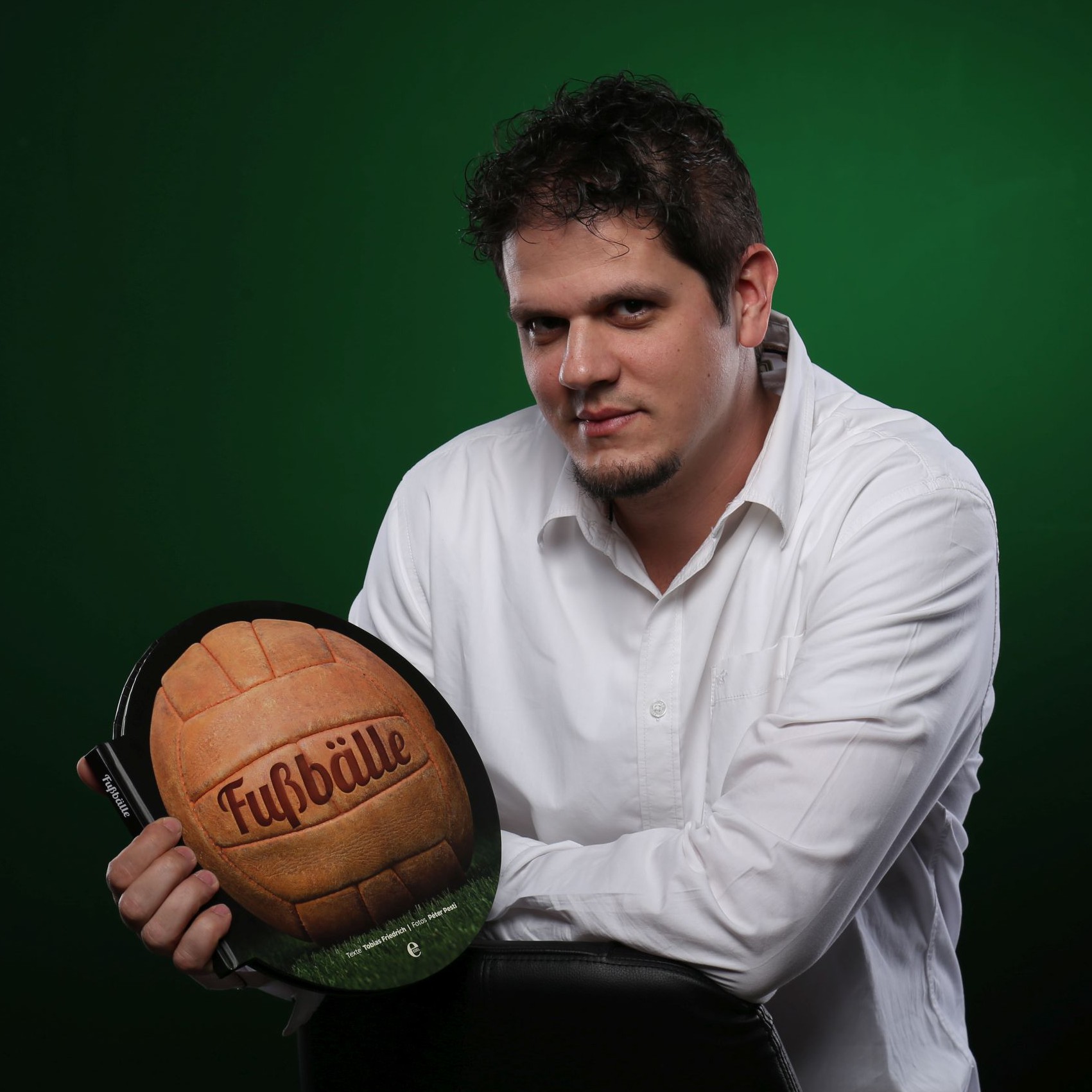 “After a few years of collecting, I realized that I can never have all the balls I need. So I decided to travel in order to photograph balls so that I can show them to the public. This is how I express myself and share my hobby with others as a photographer.”

My name is Peter Pesti, I live in Hungary and I am the founder and owner of this website. Now I tell you my story why I got addicted with soccer and what made and motivated me to create this website for you.

Soccer has been my favorite sport and even my passion since I was a little child. I used to play soccer almost every day with my friends while I grew up. We used to watch games together on TV and I fell in love with this sport immediately. My grandfather used to talk about the era when Hungary was considered as the best team of the world in the 50’s. Ferenc Puskas with our national team has not been beaten for three and a half years till the final of the 1954 World Cup and after loosing that match our whole nation was shocked, it was a national disaster for us. But when my grandfather kept on telling me stories about soccer and famous players, I became a huge soccer fan. First I started to collect soccer shirts and I used to wear them in school as well and even on the street anywhere I went. (By the way, my grandfather was born on 13th July 1930, exactly on the same day when the first World Cup started – this is a remarkable birthday and I dedicate this website to his memory…)

When I got older and became a high school student, I was always kicking a soccer ball while I was studying. I used to hold a book in my hands and while I was reading it, my feet were playing with a ball… My father used to be the head of an agricultural company those years and whenever he traveled abroad for a business trip he always took a ball home for me. I used to play with these balls and destroyed them all with my friends in our local soccer competitions.

I still remember the first World Cup ball that I have ever seen. This adidas Questra match ball was used in the final match of the 1994 FIFA World Cup and was displayed in a museum in the city of Eger in Hungary where Sandor Puhl, the Hungarian referee of the 1994 World Cup final match has brought it. I was looking at this ball for about 15 minutes and I could not move! It was love for the first sight. (This sport museum in Hungary became an unforgettable memory, I always visit the local sport and soccer museums wherever I travel in the world ever since.)

A few years later when the 1998 adidas Tricolore match ball was available in Hungary, I saw it in an adidas shop but since I was only 17 years old, I could not afford it. A year later I traveled to the USA to visit my American family and I bought the Mitre Ultimax, the official match ball of the Major League Soccer. This was my first matchball and I was extremely happy to own and to be able to play with such a high end ball. I still have this ball at home, however it is worn out very much by now.

A few years later I spent a year in Belgium as an Erasmus student and I started to work in Belgium. I made good money there and I could afford to buy the recent official match ball of the UEFA Champions League, the adidas Finale blue star ball. This ball is so far the best ball that I have ever played with. I remember hitting the crossbar from 16 meters 4 times out of my first 5 trials – this was my first impression with this ball and that I will never forget.

During these years I got to know eBay and I could buy other match balls from there. In the beginning I wanted to buy everything I could afford but I had no money to keep them all, so I started to sell some of them. Because of this activity I got to know many friendly collectos in the world and I realized that I am not the only person in the world who collects balls. As you can see, my passion of collecting soccer balls begun with the love of this sport and later the trial of high end matchballs. Loving and admiring them made me become a collector to recent day.

Just before the 2006 World Cup the Hungarian National Television came to my house and made an interview with me and I was talking about my collection. I became famous in Hungary because of my hobby. In 2009 I found out a charity idea for the introduction of the new adidas World Cup ball in December 2009 at the FIFA Final Draw. Such idea has never been seen before and I traveled to the Headquarters of adidas in Germany to introduce them my plan. They were very happy to hear it and were thankful for it but there were some other reasons why they could not finalize this plan. It would be too long to tell you this idea here, I might upload a video of it to this site later. But apart from the fact that my charity idea has not been organized, I have a wonderful relationship with adidas ever since. Sometimes they send me game used balls and they have also bought a few sets of my pre-adidas World Cup balls (1930-1966) for different exhibitions and I have also bought their historical matchballsets. With the help of adidas even FC Bayern Munich has bought the pre-adidas World Cup balls from me and they have a footage of them at their museum in the Allianz Arena.

When the 2010 World Cup was approaching, the Hungarian National Sport Magazine published a 4 page interview with me about the history of the World Cup balls, it was my second appereance as a collector in the Hungarian media. In 2012 the story was repeated but this time I was talking about the developement of the UEFA Euro Cup balls. People in Hungary are interested in reading about their favorite sport, however soccer ball collecting in Hungary is not so popular, I only know one Hungarian collector, apart from myself.

But let’s get back a few years of my story line: A few weeks after the death of my grandfather in 2007, I decided to create a website (and I called it www.worldcupballs.info) in order to show the variety of soccer balls to the entire web and make a meeting point of collectors in the world where everybody is displayed on a world map (you can see the collectors of the world if you click here). My idea was to take identical photos of every ball for the site, but since I did not own all the balls, I decided to travel to meet collector friends, and to take the photos of their balls with my special design and photo equipment. The first place was the home of my great friend, Tiziano Lanza in Italy and my second destination would have been Javier Pinero in Spain in September 2007. But then a disaster happened… While I had a stop in Barcelona at Nou Camp to see a Champions League match, our car was robbed out! I lost all my money, my documents, laptop, photo equipment, clothes and everything that I had in the car, even the pictures I took at Tiziano. This is the reason why I finally did not manage to visit Javier in Bilbao, so this European collector visiting tour became a disaster. However I planned this entire tour in order to take identical pictures of the balls of my collector friends for this website.

After this robbery I got depressed, it took me a very long time to recover but I did not want to give up my dream of creating this website. I bought a new laptop, new photo equipment and I sent them to Javier and he took perfect pictures of his balls for my website! Later I visited another highly respected collector friend, René Sopp in Germany and I took pictures of his balls for the website, too. In 2012 I visited another two collectors in Germany (Roman Machado and Marco Roth) and took pictures of their balls for this website, too. Now all the balls that you see on this website are photographed the same way and it is probably the most complete image gallery of soccer balls in the world. (If you have any balls that is not displayed here, please contact me so that the site is complete and up to date.)

But displaying the various balls is only one feature of the site. Now it is much more than a simple image gallery. It is built with features that serve collectors’ needs (like the free buying and selling built engine, the forum, the collector profiles, the world map of collectors, the introduction of balls with additional photos, descriptions, videos, documents and the museums).

To summarize my thoughts I have to tell you that I have created this website for you, collector friends with a lot of enthusiasm, time and energy, please use it with as much pleasure as I made it for you. Please inform your friends about it even if they are not collectors (you can do it through the facebook share icon of almost each subpage), inform the not yet registered collectors (who you know) to join us and appear on the world map of collectors, let’s show the entire world how big we are!

And finally my last and most important thing to tell you: during the past few years I managed to get to know and even met many collectors who became very good friends of mine. We live in different parts of the world but we have the same passion that brings us together. Now I have friends in almost every part of the world and it all happened because of the love of our favorite sport. This makes me delighted and grateful. If anyone of you should ever travel to Hungary, keep in mind that you have a friend here…

Find some photos of my life below proving that I have always been obsessed with balls. 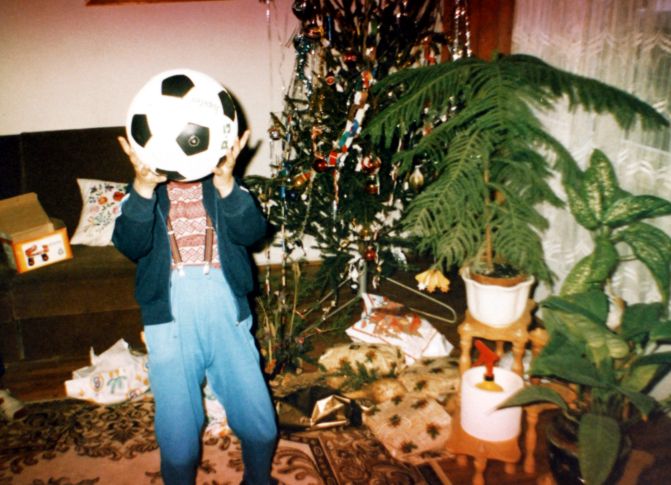 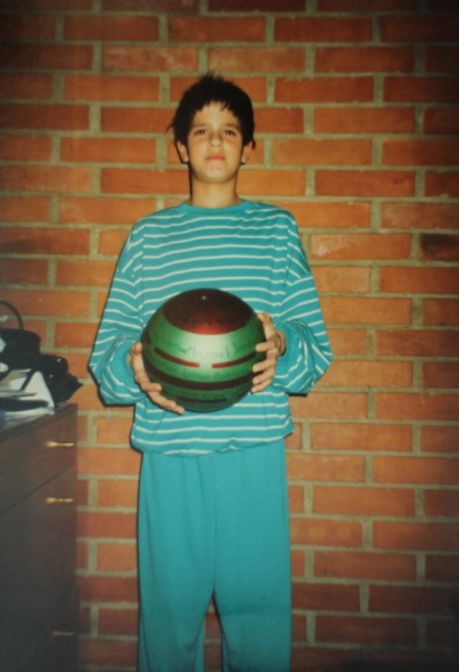 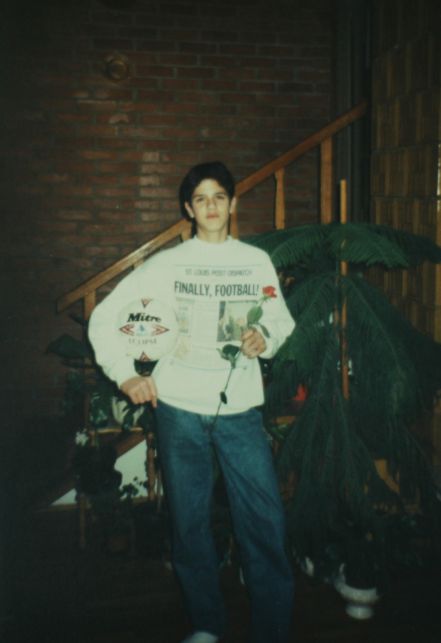 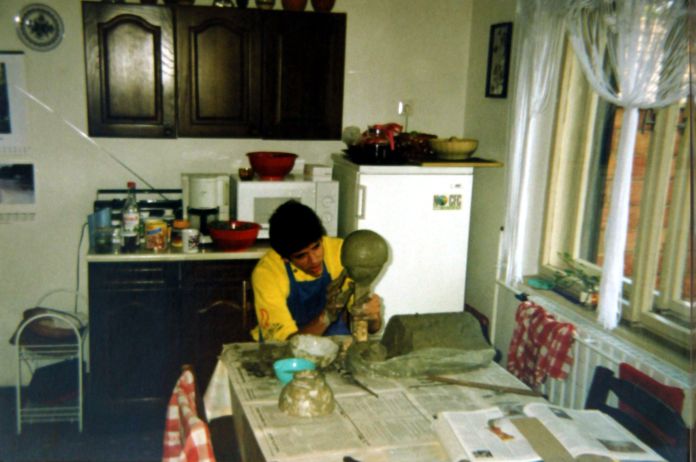 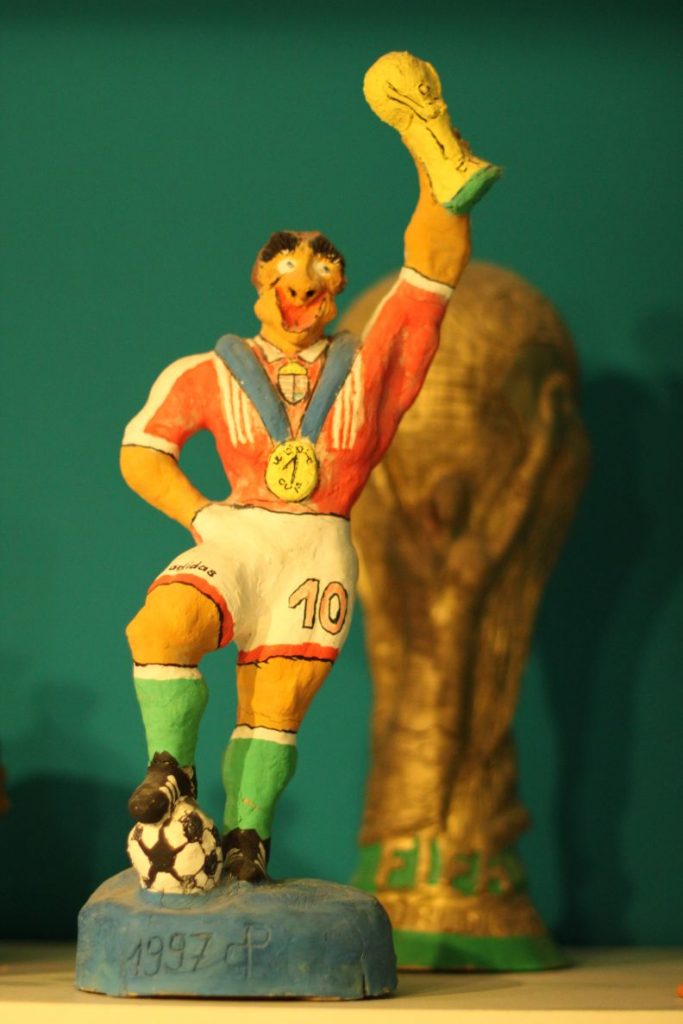 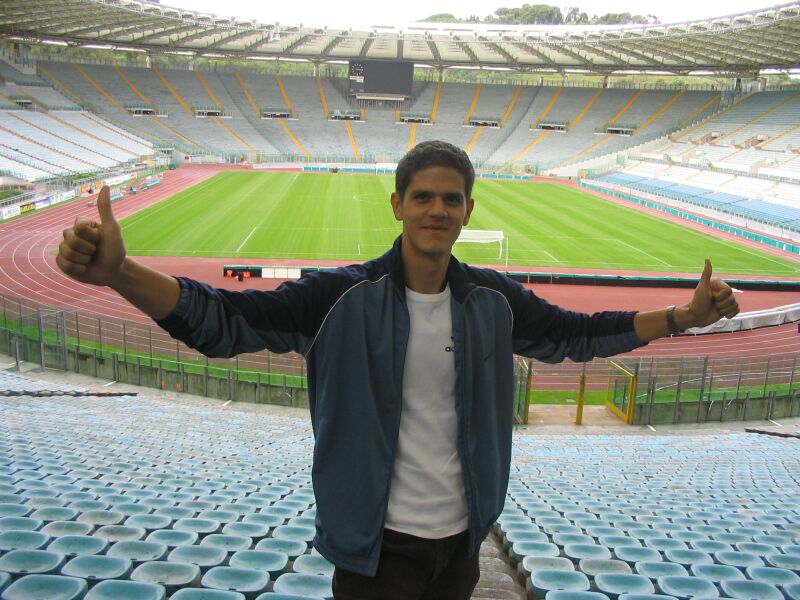 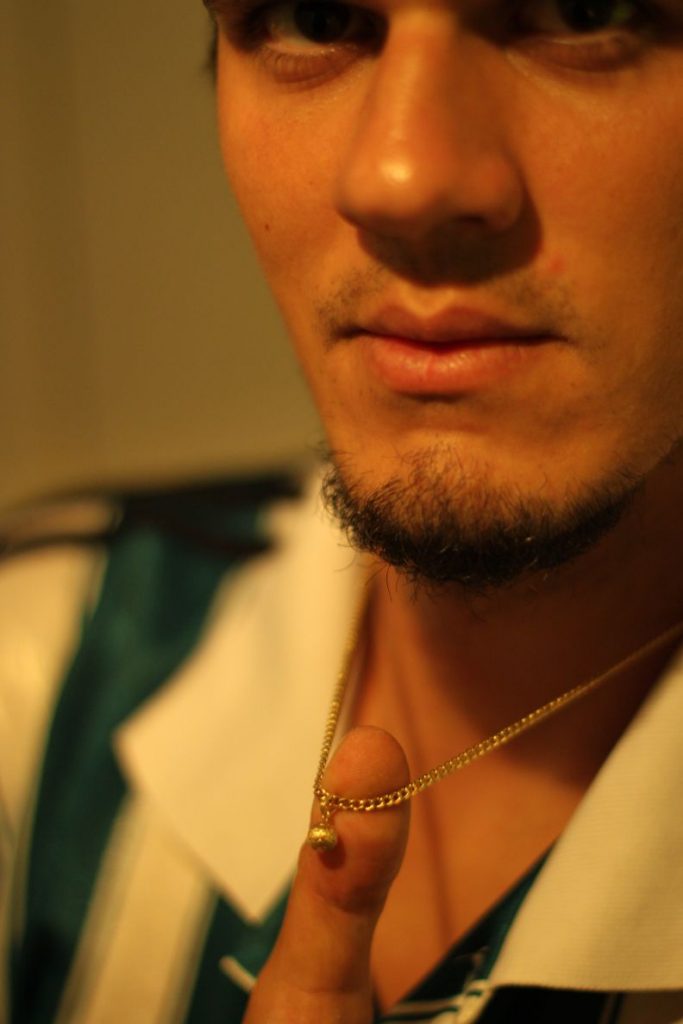 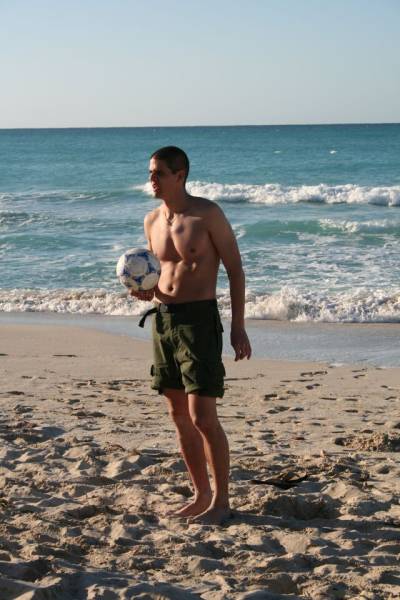 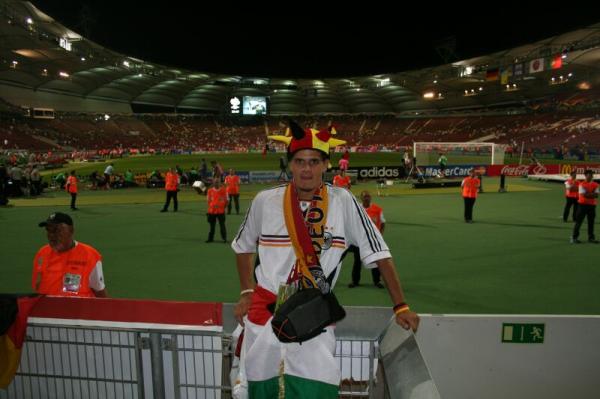 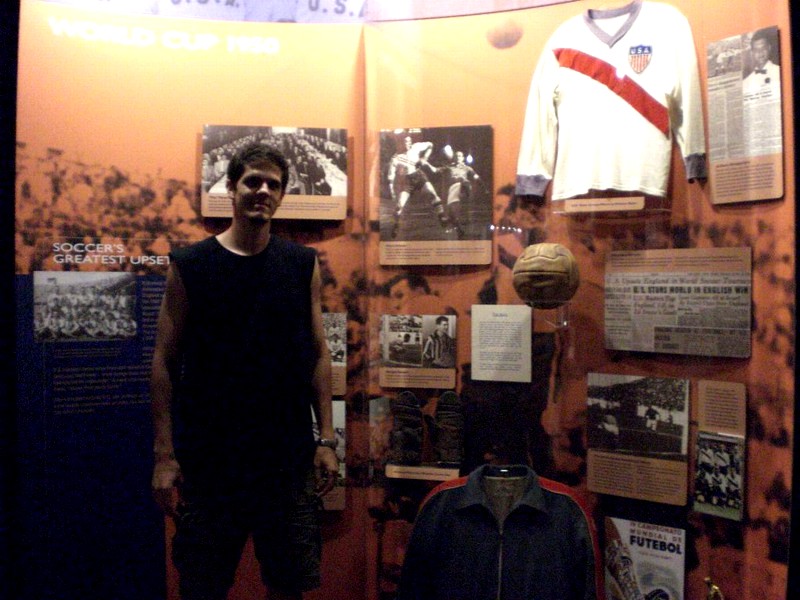 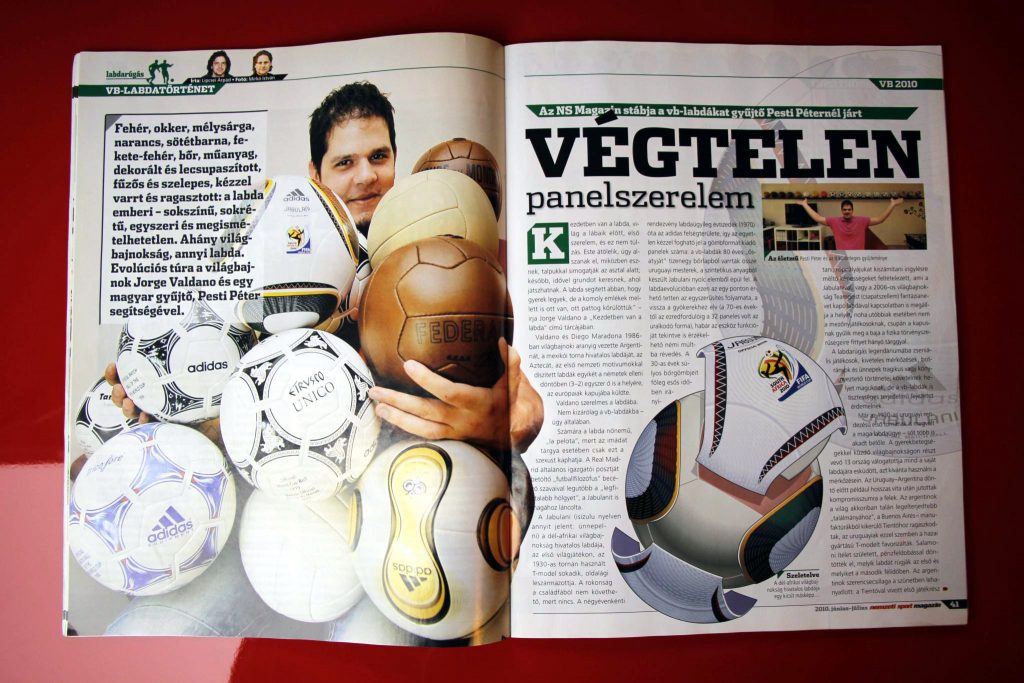 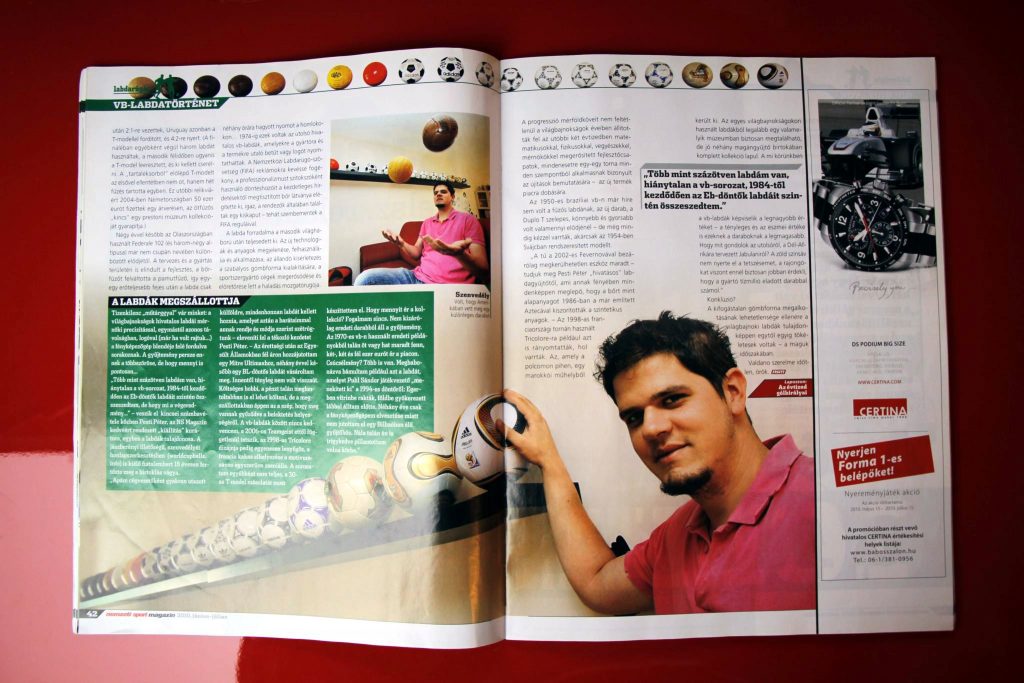 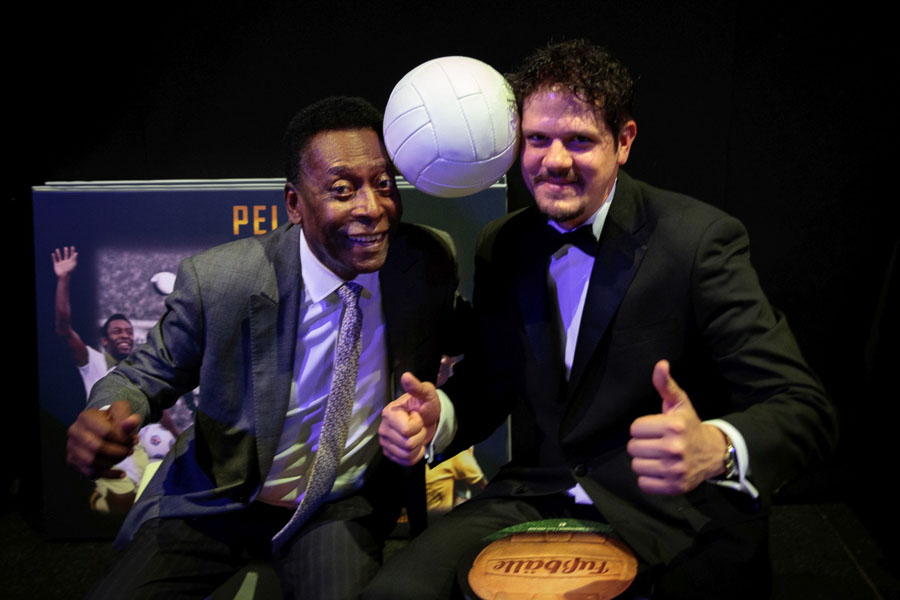 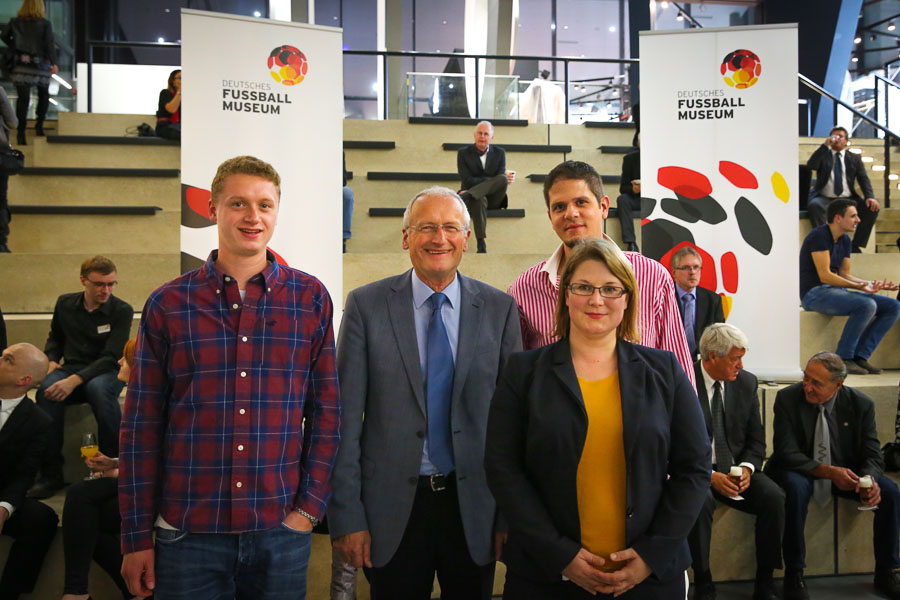 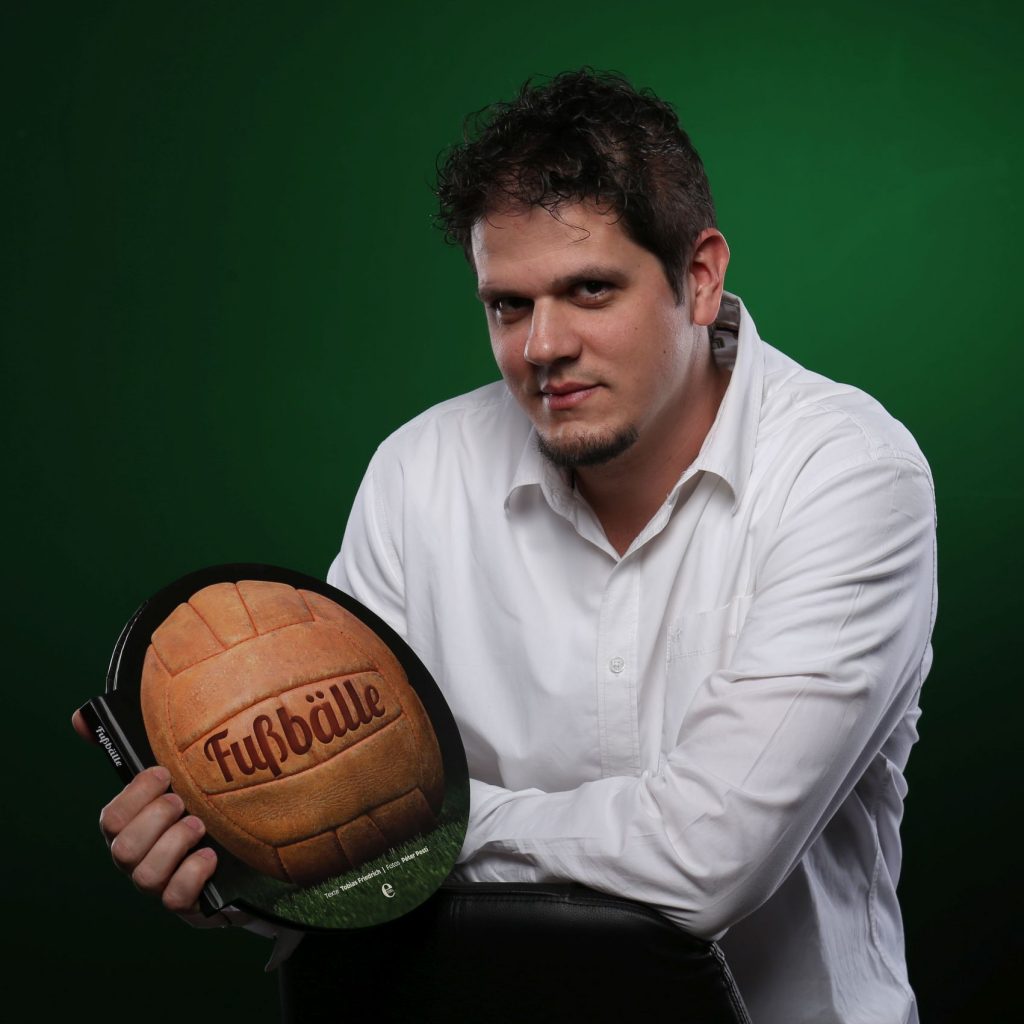 +
All I wanted for Christmas was a soccer ball
I did not care if a ball was made of rubber
FINALLY FOOTBALL (1995)
Many times I posed with balls on photos in my childhood 🙂
Preparing my home made FIFA World Cup trophy (1996)
My hand made sculptures of clay
I asked the guards to let me see the Olympia Stadium in Rome...
My golden football necklace (a gift from my parents for my graduation from high school)
I even took my first and so far favorite World Cup ball to Cuba
After the bronze medal game of the 2006 FIFA World Cup
At the soccer Hall of Fame in USA with the original 1950 World Cup ball
Me in the National Sport Magazine in Hungary in 2010 (part 1)
Me in the National Sport Magazine in Hungary in 2010 (part 2)
Image caption comes here
Image caption comes here

If you wish to write me as message or send me some photos, I will try to answer in 24 hours. Thank you for your patience!